A study in text, photographs, music and graphic design of the fiddler Ben Lennon of Kiltyclogher, Co. Leitrim. 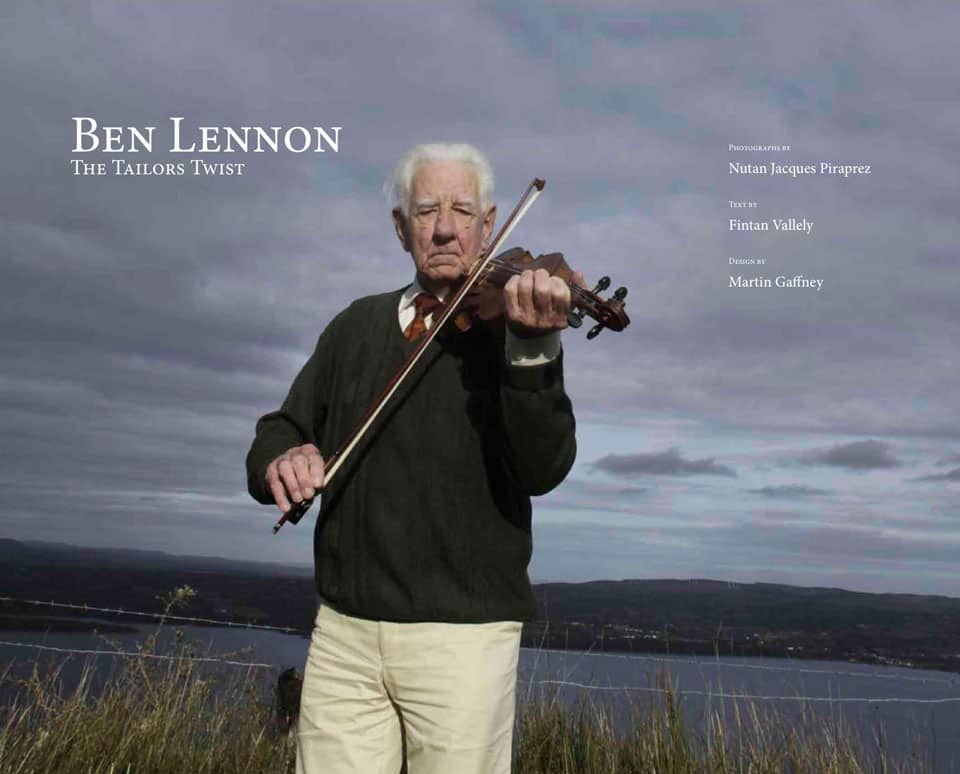 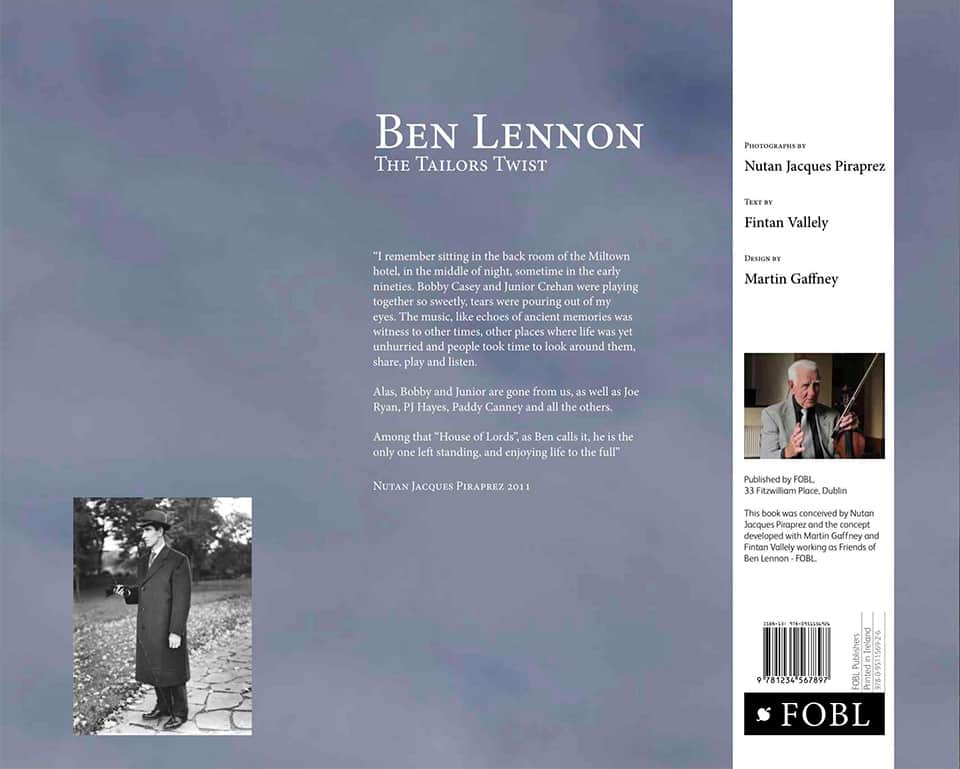 Ben Lennon’s life is documented here in words by writer Fintan Vallely and he is presented within his music society in a hundred and more striking photographs by international award-winner Nutan Jacques Pirapez. These elements are integrated by a vigorous, complementary design by Martin Gaffney as the visual story of a personal journey in music by a commentator who has a bird’s eye view that is a panorama of the technological and artistic transformation from the old Ireland to the new, from traditional music redundancy to its artistic supremacy. The text includes the notation of 33 tunes played by Ben, many of them his hallmark pieces.

The text is based on interviews done by Fintan Vallely in June, 2010, as well as on other conversations with Ben and on his own personal biographical notes; photographs represent conviviality, community, vitality and joy and cover a wide span of years with emphasis on the contemporary. The book is tenderly endorsed by Séamus Connolly, Ciaran Carson provides a poetic Prologue and Fr. Séamus Quinn a touching epilogue, and it includes comment by Maurice, Brian and David Lennon, by Gabriel McArdle, Desi Wilkinson, John Carty and Andy Dickson.

The Tailor’s Twist is a documentary, a biography and ethnography, a tune collection and a superb photographic archive. It was conceived by Nutan Jacques Piraprez and the concept developed with Martin Gaffney and Fintan Vallely working as Friends of Ben Lennon - FOBL. It includes both contemporary images of Ben and material from Nutan’s photographic archive assembled over several decades. Additional informative imagery has been assembled by Martin Gaffney from archival and other resources and from Ben Lennon’s and the Lennon family’s memorabilia. Other images courtesy of Derek Speirs (Report), Fintan Vallely and others as credited.

The book is a substantial size of publication in full colour on heavy cartridge paper. Text (42k words) is illustrated with appropriate historical images in the first half; the second part of the book is totally photographs, many large-scale. A 'coffee-table' style work, this is eminently suitable as a gift.

The project was made possible by research and development funding generously provided by the Deis Traditional music support initiative of An Comhairle Ealaíon – The Arts Council of Ireland.

The Tailor’s Twist has had the unstinting cooperation of Ben Lennon himself, and is inspired by all his friends throughout Ireland who have been hugely appreciative in their thousands of hours of music-making and late-night holding court with him over the decades.

The title tune of this book - The Tailor's Twist hornpipe - was somehow mixed up at the page make-up stage with Jamesy Gannon's Barndance. Sincere apologies to musicians! We reproduce it below in the form played originally by Michael Coleman.