Leitrim may seem to be a backwater of Irish business life, but the crises of commerce have kept its property prices low, and so it has thus enjoyed an enthusiastic repopulation by some of Ireland’s leading artists.

This is a sensitive tribute to a county which has always had great standing in Irish music throughout the 20th century on account of the impact of the American ’78 recordings of Tarmon flute player John McKenna in the 1920s and ‘30s, Killargue fiddler and composer Joe Liddy of the Belhavel trio, since 1989 Nancy Woods’ Joe Mooney summer school at Drumshanbo and the London-based Kiltyclogher fiddler Brian Rooney.

County Leitrim overall has a great historical standing in music, with harper Turlough Carolan’s time spent at Mohill marked by a dramatic sculpture there, and his tunes recalling his local patrons. The brilliant ‘Pléaracha Uí Ruairc’ (O’Rourke’s Feast), one of the earliest Irish tunes committed to print (1743), was composed in honour of O’Rourke of Dromahair, and the popular ‘Sheebeg and Sheemore’ was his first composition, made for onetime harper Squire Reynolds of Lough Scur.

Two centuries later The Nicholls of Carrigallen are cited in Francis O’Neill’s Irish Minstrels and Musicians as ‘reverend’ and ‘gentlemen’ pipers respectively, the latter the composer of the elaborate 9/8 jig ‘Gusty’s Frolics’. one of O’Neill’s sources in Chicago and a tremendous promoter of Irish music was (Sergeant) James Early of Carrigallen, a flute, fiddle and pipes player and reed maker who was mentored in the USA by piper John Quinn of Cloone and noted down many tunes. Stephen Grier and Alex Sutherland collected and preserved much repertoire in the south of the county, some heard on the McNamara’s of Aughavas 1998 recording, and some in print in Jackie Small’s Ceol Rince na hÉireann 4 collection. The Mulligans of Bornacoola and Dublin carried Leitrim style to Dublin and all over Ireland, and in modern time several All-Ireland fleadh senior titles have been won: by Ben Lennon’s son Maurice (fiddle, 1977), Brian McNamara (pipes, 1985), Tom Morrow (fiddle, 1991), John Morrow (banjo and mandolin, 1994) and Yvonne Ward (whistle, 2009). 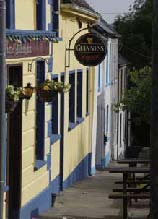